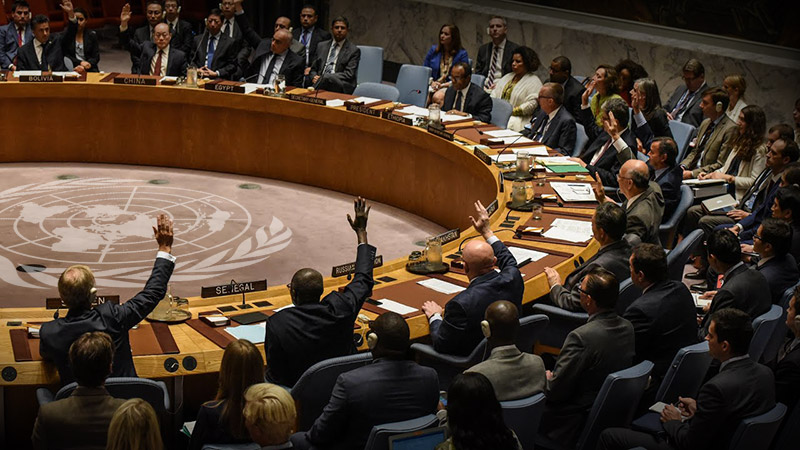 A video of the representative of Iran’s terrorist regime at the United Nations Security Council that was omitted from the full video by all the media in the world!

This part of the speech by Iran’s representative in the UN Security Council was omitted by all the media in the world, in a united act and at the same time. If it hadn’t happened, RESTART opposition would have been known globally, and Iran’s regime would have been changed by now!

This shows that they are all being ruled by one specific group!

Listen to the shaky voice of the Iranian regime and the fear of RESTART opposition. The video speaks for itself!

The UN Security Council meeting was held on January 5, 2018, at the request of President Trump to discuss the December 2017- January 2018 uprisings in Iran; however, it ended due to objections from other countries arguing that the United States had abused the UN’s platform to meddle in Iran’s internal affairs.
In this session, the US representative emphasized that the world should condemn the suppression of the Iranian people by their own regime and must not act indifferently towards this matter as they did in 2009.

The meeting was only held because of RESTART opposition and the suppression of the uprisings by the regime in Iran; but in his speech, Iran’s representative stated that America wants to change the regime with the help of the RESTART opposition!
Iran’s terrorist regime then demanded the US government to hand Seyed Mohammad Hosseini (RESTART leader who lives in California) over to them. And added that the regime had asked Pavel Durov, the founder of Telegram, to close Hosseini’s account and he had done so!

One of the reasons Iran’s terrorist regime asked the UN and United States in the Security Council to hand Seyed Mohammad Hosseini over to Iran was the programs RESTART leader broadcast to Iranians in Persian so they realize why they shouldn’t go to Syria and Iraq and fight the Americans!
Millions of people heard that and didn’t do so!

Hosseini saved the lives of many Americans, British, Germans and… Not only did anybody give him an award for that or interviewed him, but also the Iran regime plotted his assassination, which was leaked later and some Democrats tried to deport him back to Iran!

Now the question is;
Who had called every single journalist and asked them to omit this part of his speech from the video and censor RESTART opposition?!

Seyed Mohammad Hosseini’s remarks on this censorship:
“That day, for the first time, I realized that the world Patriots are so oppressed and haven’t been allowed to defend their rights!”.

One month later, an order was issued by the IRGC terrorist officials and Iran’s leader to assassinate RESTART leader, which was not covered by the mainstream media!

In the below video, the representative of the leader of Iran, officially announces that RESTARTEES would be sentenced to death (execution) when arrested, however, this was not covered by the media either!